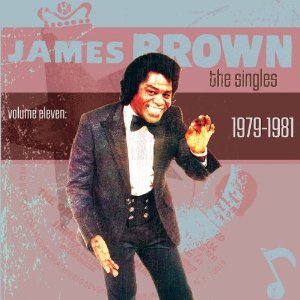 JAMES BROWN fans and funk collectors in general have been spoiled over the last couple of years as Universal/Hip-O Select diligently released a series of CDs that brought together all the GODFATHER’S singles from the time he was contracted to Polydor. The series has, at last, reached its final volume – #11.

The two CD, 28 tracker covers the period 1979 – 1981 and includes all the 7″ singles which BROWN released in those years. Amongst them is the collectable B-side ‘Let The Boogie Do The Rest’ and the country tinged ‘Regrets’ which is the nearest we get to a musical biography of the man. There’s also an interesting re-make of ‘I Go Crazy’ and ‘Rapp Payback’ which was actually recorded for TK. You also get 9 12″ mixes of stuff like ‘Get Up Offa That Thing.

As with all the albums in the series, this set comes complete with full liner notes, essays, timelines, rare photos and, fittingly, an epilogue.