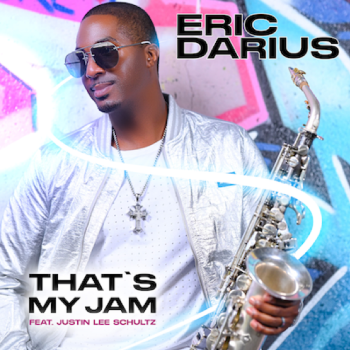 ERIC DARIUS is a new name to us. Saxophonist, Songwriter, Producer, and Performer, we’ve learned that Eric was born in Livingston, New Jersey, raised in Tampa, Florida, and now resides in Los Angeles. He grew up in a very musical family to a Haitian father, who is a bass player and Jamaican mother, who is a singer and piano player. That Caribbean influence was passed down to Eric and his siblings. His older brother is a drummer and trumpet player, and his sister sings and plays clarinet. Mr D cites his influences as  people Earth Wind & Fire, Michael Jackson, Stevie Wonder, Marvin Gaye, George Benson, David Sanborn, Miles Davis, Bob Marley, and Grover Washington Jr., and you can certainly hear the pulse of Sanborn and Washington on Eric’s new instrumental single, ‘That’s My Jam’.

‘That’s My Jam’ is brash and upbeat with a feel good atmosphere and after just one week out it become the #1 Most Added Song on the Billboard Groove Jazz Chart. Produced by Philip Lassiter, the tune features young Justin Lee Shultz on keys. And we’re told that the cut comes from the sax man’s upcoming album – his second set for his own label, SagiDarius Music. Whilst we await that long player (Darius’ 8th as leader), you might well want to check out the in-your-face “jam”  that is ‘That’s My Jam’. Out now via your preferred download/streaming platform.