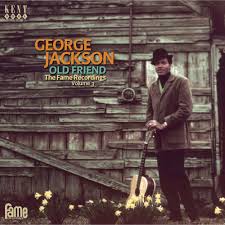 GEORGE JACKSON –the doyen of Southern soul singer/songwriters – died earlier this year. Ironically his untimely death came at a time when his career and status were enjoying an uplift thanks to Ace Records reissue programme of his Fame Recordings.

Released on their Kent soul subsidiary, Ace have already released two volumes of Jackson material – much of it previously unreleased – and both have become essential for Southern soul collectors. The label has just issued a third volume from the Jackson archive and the quality and soul quotient remains every bit as high as on those first two sets.

Titled ‘Old Friend’ (from one of the album’s key cuts –a classic, melancholy Southern ballad) there are 24 cuts on the set and, remarkably, all but 2 have never been available before. Jackson’s in tremendous form throughout and the musicianship of the Fame rhythm section is as you’d expect and as a bonus, guitarist Duane Allman guests on a couple of tunes.