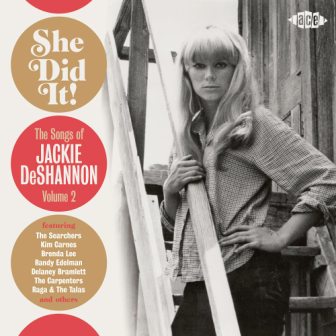 Over the last couple of years Ace Records have been steadily reissuing the Liberty and Imperial singles of singer/songwriter JACKIE DESHANNON. JACKIE, whose own songs were recorded by numerous soul artists including IRMA THOMAS and BARBARA LEWIS, was prolific at those two labels and the Ace Records retrospective has now reached Volume 3.

The new 27 tracer covers the years 1967-70 and includes one of the singer’s biggest ever hits – the easy-rolling ‘Put A Little Love In Your Heart’ (a song that’s been part of the 4 TOPS’ stage show for many years). Also featured are JACKIE’S versions of ‘It’s All In The Game’, BOBBY WOMACK’S ‘Trust Me’ and a medley of ‘You Keep Me Hanging On’ and ‘Hurt So Bad’. The collection also boasts a couple of Christmas songs – ‘Do You Know How Christmas Trees Are Grown’ and the self-explanatory ‘Christmas’

JACKIE DESHANNON; ‘Keep Me In Mind – the Complete Imperial and Liberty Singles Volume 3’ is out now.