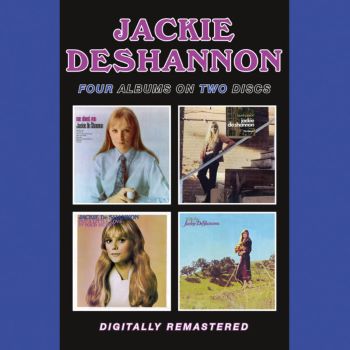 Singer/songwriter JACKIE DESHANNON was making blue-eyed soul long before that term was even coined and despite that fact that in the mainstream at least she’s best remembered for covers of some of her songs (think the Searchers’ ‘Needles and Pins’ and ‘When You Walk In The Room’) her own chart record is impressive, Between 1963 and 1980 she enjoyed 16 US hit singles and her album output was consistently acclaimed.

Over the years, DeShannon’s back catalogue has been sensitively curated by UK reissue label BGO and that label carries on the excellent work with four of the singer’s LPs reissued across 2 CDs in one album package. The LPs are ‘Me About You’, ‘Laurel Canyon’ (both 1968), ‘Put A Little Love In Your Heart (1969) and ‘To Be Free’ (1970).

There are 49 songs to enjoy, and they are a mix of DeShannon originals and well-chosen covers. Soul cover collectors will be delighted to have fresh perspectives on things like the Motown chestnuts ‘I’ll Turn To Stone’, ‘You Really Got A Hold On Me’ and ‘You Keep Me Hanging On’ and Teddy Randazzo’s ‘Hurt So Bad’. And despite being an acclaimed song writer in her own right, Jackie was humble enough to cover songs from other top writers – like Leonard Cohen (‘Bird On The Wire’), John Sebastian (‘Didn’t Want To Have To Do It’), The Band (‘The Weight’), Jimmy Webb (‘The Girl’s Song’) and Cream (‘Sunshine Of Your Love’). Those last two incidentally also recorded by the Fifth Dimension at their peak and their lovely “sunshine pop” sound is what Jackie DeShannon captures across her work here.

The four included albums are also brimming with sparkling DeShannon originals like ‘Laurel Canyon’, ‘Splendour In The Grass’, ‘Brighton Hill’, ‘Come Stay With Me’ (covered successfully by Marianne Faithful) and ‘Put A Little Love In Your Heart’ which, we’re told, is the writer’s most covered song (check out versions by Gladys Knight, David Ruffin and the Isleys).