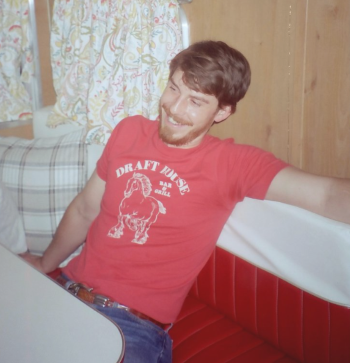 JACK HIGGINS (above) is  a Las Vegas based singer and songwriter who taught himself to play the guitar at age 14 and started writing original songs soon after. An alumni of Berklee College of Music, he graduated in 2018 with a degree in songwriting. Since then, Jack has been writing and working at his home in Vegas. His first release was a collaborative single, with his brother Bennett–titled ‘Stressing’ –which has accumulated millions of streams across platforms. The music he was hoping to create  via the track, his people tell us, was “a genre blending sound  –  pop-forward with soulful elements of R&B and hip-hop.”

Jack develops those ideas further with his first solo release, a six track EP, ‘Red Hot Burning Love’. Jack sees the mini album as a sort of song cycle  that highlights the many faces and phases of love – from meeting to infatuation to devotion. However, it’s the gentle soundscape of the set that captivates – it’s soulful, a little in the currently “retrophile” mode; the delivery is rhythmic; there are elements  of classic soul/folk via the storytelling (think Terry Callier)  and Jack croons sweetly in a uniquely comforting way.

Amongst the set’s highlights is a crisp ‘The Business’ (listen up to the clever ending), the gentle ‘Trying So Hard’ (sweet soul harmonies here) an the more syncopated ‘Red Hot’. But it’s actually churlish to cherry pick. Each tracks has plenty to offer and the set is meant to be heard and digested as a whole – the concise six tracks make that an  enjoyable and easy possibility.

Helping Jack deliver are Mayzin (organic rap on ‘Hello Lady’) and  Fya Man (rhyming on ‘Holy’) who both  help with the creation of a unique, hybrid but souful sound that comes recommended if you like melding of the old and the new into something   just a little left field! Out now!