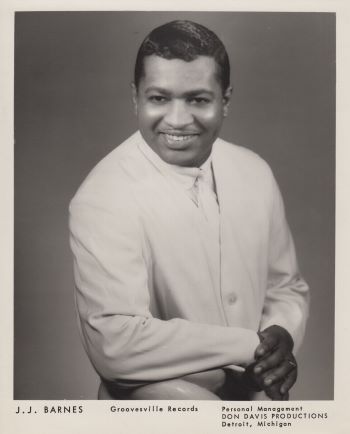 Detroit soul legend J J BARNES died on Saturday 10th December. He was aged 79 and the sad news was announced by granddaughter, Ry’ann Ernst. No more details are available save that in an interview with a Detroit newspaper earlier this year, Barnes suggested that after his show at the Detroit A-Go-Go festival, that that show would  be his last live performance  because  of health issues.

James Jay Barnes was born in Detroit in 1943 and enjoyed a varied music career. He never made the major leagues but he was revered in the UK by the Northern soul crowd for whom he ticked plenty of boxes – he was from Detroit; he recorded for legendary labels like Ric Tic; he was unknown in the mainstream; his recordings were hard to find; his music was eminently danceable; oh, and he had a great set of pipes, this man can could sing soulfully!

Barnes’ career began in 1960 when he was signed first to local Detroit labels Mickay and Ric Tic. Early recordings on those labels – like ‘Just One More Time’ and ‘Please Let Me In’, meant nothing on initial release but eventually  became in-demand items on the Northern scene. After  the Berry Gordy-led demise of Ric Tic, J J signed to Motown where he was used chiefly as a songwriter though he did record too. None of his  tracks were released during his tenure with the label , though they did later appear of the famed ‘Cellarful of Motown’ compilation series.

J J was also a member of vocal group ;’The Holidays, whose members also numbered Edwin Starr and Steve Mancha. They enjoyed a hit in 1966 with’ I’ll Love You Forever’ though Barnes’  biggest solo hit was  his 1967 Groovesville recording ‘Baby Please Come Back Home’ (Stevie Wonder was a co-writer by the way).  It goes without saying that that one was another in demand item on the Northern scene. The track has a  flavour of Marvin Gaye about it and some suggest that Barnes’ vocal similarity to Gaye was one of the reasons he was held back at Motown. Barnes also recorded for Stax/Volt and Perception. His Volt ‘Rare Stamps’ LP (an album shared with Steve Mancha) is eminenlty collectable.

In 1970 Barnes moved to England to profit from his status on the Northern/rare soul scene. He was encouraged to make the move by his friend Edwin Starr who had already come to the UK. In England, Barnes signed to Contempo Records and became a crowd rousing  performer at Northern soul events. His popularity led the UK arm of Motown to issue many of  his singles, amongst them ‘Please Let Me In’ and ‘Real Humdinger’. He recorded new material for Contempo and amongst the highlights was an album named for the Hall/Oates song ‘Sara Smile’. Barnes  eventually went on to work with Ian Levine re-cutting Motown classics like Frank Wilson’s ‘Do I Love You (Indeed I Do)’.

In music writing the word “legend” is overused. In the case of James Jay Barnes, though, it is absolutely merited. On the Northern soul scene he achieved an almost saintly status but dig deeper into his music and you’ll discover that Barnes could provide much more than “sole music”. He was a proper soul man with a gospel back ground (his father was a member of the famous Evangelist Singers) and hear that wonderful soul voice on cuts like ‘Wishful Thinking’ (Perception), ‘She’s Mine’ (Contempo) and his version of Ace’s ‘How Long’.