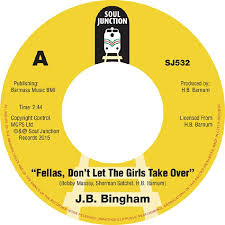 Back in the 70s soul man J B BINGHAM quit his gig as lead singer with FIVE FLIGHTS UP to strike out on a solo career. Working with H B Barnum and Steve Binder, he cut seven songs which were offered to United Artists… and two singles were eventually released. The best-known is soul connoisseurs’ favourite, ‘All Alone By The Telephone’.

Because only two 45s were ever issued, three Bingham songs were left in soul limbo – till 2013 when UK soul specialist label, SOUL JUNCTION released two of ’em , ‘People On An Ego Trip’ and ‘She’s On Strike’.

That left just one elusive Bingham cut…. and guess what? Right first time, Soul Junction have just released it. Tune in question is a beefy, pacey slab of soul advice called ‘Fellas, Don’t Let The Girls Take Over’. Lyrically it’s a bit of a side swipe at women’s’ lib but musically you’ll be reminded of the sound of Hot Wax/Invictus. I kind of hear as a re-make of ‘Want Ads’… but that’s not a bad reference point is it?

The single is out now on limited edition 45 and as a bonus, the B side is the wonderful ‘All Alone By The Telephone’. Grab a listen and you’ll understand why it’s a proper modern soul anthem.