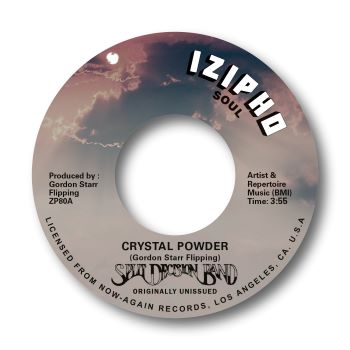 Latest release from IZIPHO SOUL features two tracks from a rather obscure group from Des Moines, Iowa, THE SPLIT DECISION BAND. Not an awful lot is known about  the band but soul sleuths sort of agree that their line-up was Gordon Starr Flipping – Guitar, Synthesizers and Lead Vocals; Jerry MacMahon – Bass; Ronnie MacMahon – Drums; Gary Jackson – Keyboards ; Del Jones – Saxophone; Kevin Walls – Trumpet; Cocoa Brown – Vocals; and John Stillwagon – Keyboards.  Prince fans will  tell you  that Flipping, the de facto leader, eventually  went off to work with the Purple one.

Prior to their demise the band  released a single on Network Records in 1978, ‘Watching Out’,  and they also recorded enough material  for an album. That LP was to be called ‘A Thing Of Your Own’ but, you guessed, it never won a release! In 2017 Now And Again records collected together as much Split Decision Band material that they could to release a self-titled album and earlier this year Soul Direction released two cuts –  ‘You’re The One’ and ‘My Love Just For You’ – on a lovely 7”. The release was much appreciated by serious soul collectors.

Those collectors will be delighted to know that Izipho Soul has also dipped into the Split Decision Band’s archive to deliver another proper soul 7”. The Izipho disc features a gentle but emotive ‘Crystal Powder’ on the A side. The lead vocal comes from Cocoa Brown who’s supported by on-point harmonies and some sweet brass work. The cherry on this Bakewell is a short male bass monologue towards  the end … a slow steppers’ delight! The putative B side features Gordon Starr Flipping on lead vocals on a late 70s/early 80s style ballad that shows that the Split Decision could have been contenders!

Find out more @ https://www.iziphosoul.com/split-decision-band—crystal-powder–say-woman-out-now-160-p.asp  and by the way our soul ‘tecs tell us that Gordon Starr Flipping is still active. He leads a non-profit outfit called Young Heroes that aims to help the youth of Des Moines through various  musical projects.