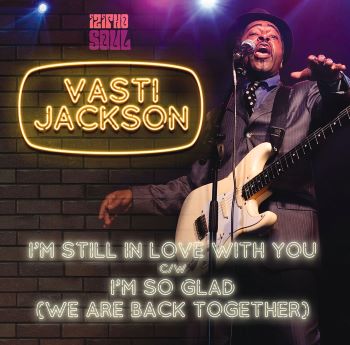 The ever reliable IZIPHO SOUL label have lined up two very different 45s  for August release. First up there’s a tasty 7” on contemporary Mississippi blues man VASTI JACKSON. Now before soul purists switch off we need to say that the two songs that make up the Izipho single aren’t what we’d call traditional blues. I’d suggest that Jackson’s music is a 21st century take on what people like ZZ Hill and Bobby Bland peddled back in the day. Sure, the music is rooted in blues but delivered in a soulful way.

The putative A side of the Izipho release is a brassy, gentle soul groove – ‘I’M STILL IN LOVE WITH YOU’. Recorded as recently as 2015, it has a real old school feel. The message is that true love never dies and passion lives forevermore and Vasti delivers with a  full-on, soulful  passion! The B side is a rolling, mid-tempo groove ‘I’M SO GLAD (WE ARE BACK TOGETHER)’ which was recorded in 2017. Sweet and lovely and hugely recommended!

The second up-coming Izipho 7” is from a different time and place altogether but none the less soulful. The A side is a big, 60s ballad  from cult soul balladeer, ROY HAMILTON. Hamilton is revered on the Northern scene for his ’66 ‘Crackin’ Up Over You’ but he was essentially a crooner whose versions of ‘You’ll Never Walk Alone’ and ‘Unchained Meldoy’ are genre classics. Sometime in the mid-60s with his career in decline he pitched up in Atlanta where the owner of the Chant label, Bill Hanley had him record an atmospheric ballad ‘MY PEACEFUL FOREST’ which for reasons unexplained was never released till it surfaced on an Ace/Kent compilation in 1998. The Izipho people think it’s high time it was on vinyl! Rightly so! Old school soul balladry at its best!

The B side features ‘DON’T LET ME KNOW’ from sometime Drifter, CHARLIE THOMAS. The story behind this track is similar to Hamilton’s tale. Thomas was working in Atlanta and Hanley got him into the studio to cut the track. Anoraks will  tell you that Charlie (who is still alive, by the way) was with the Drifters from 1958 till the late 60s and he’s the lead voice on their ‘Sweets For My Sweet and ’When My Little Girl Is Smiling’, so little wonder that this ‘Don’t Let Me Know’ has a 60s Drifters feel but sans harmonies… catchy, tuneful, urban soul. Again hugely recommended!