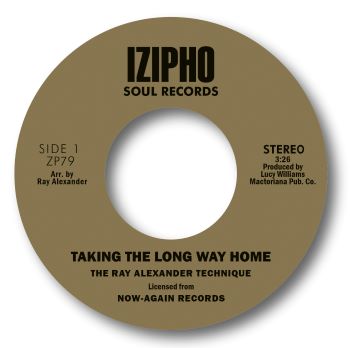 The first release features THE RAY ALEXANDER TECHNIQUE – a quartet originally  from Harlem, led by Raymond Alexander Jenkins. The band enjoy something of a cult status because of their solitary album, 1974’s ‘Let’s Talk’. The album is, of course, hugely collectable and the Izipho single pairs three  of the most lauded tracks… so I guess this one is more of an EP than a single! Top side is a delicious mid-tempo, harmonic groove, ‘Taking The Long Way Home’. The message in the music is simple – keep going – never give up – but it’s the sweet sound that captivates. The disc’s flip offers two songs  and on both of ‘em there’s guest input from Lu-Jun label mate and another cult soul icon, CHRIS BARTLEY.

Chris is featured vocalist on  the sweet soul ballad ‘I Am In Love With You’ and  ‘I Wonder Why’ which takes up the tempo a notch or two. Both songs and ‘Taking The Long Way Home’ are almost perfect 70 sweet soul artefacts – and nothing wrong with that in the soul connoisseurs’ book!

The second newie from Izipho turns the spotlight on mid- west band, RIPPLE maybe best known for their disco anthem ‘And The Beat Goes On’ which they recorded for Salsoul. Prior to that the band were pacted to Atlanta label, GRC where  they enjoyed a hit with I Don’t Know What It Is, But It Sure Is Funky’. The band cut a number of tracks at GRC and it’s two of those that are paired on the new Izipho 7”. The A side, ‘Maybe It’s You, is a soulful lilter with a jazzy undertow and a typically 70s falsetto lead vocal. The B side, ‘Sweet Lady’ is a little tougher and rides an almost Latin groove . Both songs are appearing on vinyl for the first time  and to tempt you even more the “new” edition of ‘Sweet Lady’ has been extended to over five minutes to make the eclectic keyboard solo even more enjoyable. Interestingly the song was written by “Rippler” Curtis Reynolds who is currently enjoying a renaissance as Brick and Ripple with Jimmy Brown (see our recent news item).

Both these lovely new discs are released on Wednesday 15th June and they’re sure to sell out quickly. As ever, find out more @ https://www.iziphosoul.com/