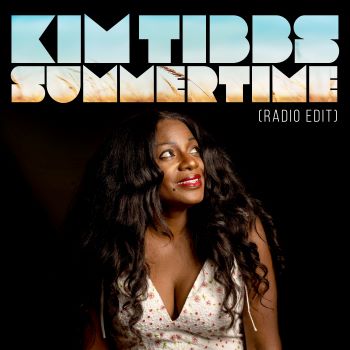 In case you hadn’t noticed – droughts, heat waves, hose pipe bans etc – it’s SUMMER!  And to help convince us,  the lovely KIM TIBBS has just released a single simply called ‘Summertime’ . First off we need to say that this song isn’t the George Gershwin classic; rather it’s a new dreamy ballad that evokes a real summery atmosphere and Kim shows her vocal skills with some jazzy scatting and a soulful conviction. You won’t be surprised to learn she served a vocal apprenticeship in the church!

‘Summertime’ is one side of a single (now out via Bandcamp). The other side is a busy, bustling ‘Walk To The Light’ – a full on soul production that once again has “gospel conviction” stamped all over it! Like ‘Summertime’,  this one was recorded in Memphis’s famed Hi studios under the auspices of Papa Willie Micthell’s son, Boo. The studio gang were so impressed with Kim that they allowed her to use Al Green’s old mic!

The two songs are tasters for Kim’s long-anticipated upcoming long player , ‘THE SCiENCE OF COMPLETiON VOLUME 1 (T.S.O.C.V.1)’ (due mid-September). But ‘Summertime’/‘Walk To The Light’ are good to go now and are released in conjunction with Black Orchid Records, Soulfood Music, DSG Radio Promotions, Izipho Soul Records and AWAL/Sony. Learn more about Kim and her music via this radio interview… https://www.mixcloud.com/garyspence798/gary-spence-afternoon-delight-thurs-18th-august-2022-interview-with-kim-tibbs-/?fbclid=IwAR3fV7LJWdq6Q301PpJ1nZ_vh3HL31VHne5ipMS7uzwiwg7uInW2Ta25220