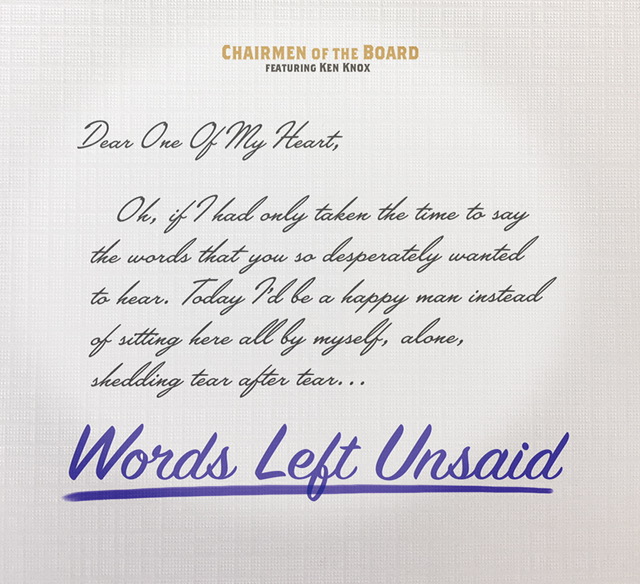 THE CHAIRMEN OF THE BOARD are one of soul’s iconic groups. They were the standard bearers for Holland-Dozier-Holland after their momentous split with Motown and with the mighty trio behind them, the General Johnson-led Chairmen scored hit after hit.

As fashions changed, the Chairmen found a new niche on the Carolina Beach Music scene and after the sad passing of Norman Johnson in 2010, the lead singer’s mantle was assumed by Ken Knox. He was chosen especially by Johnson but out of respect for the him, Ken opted to put the Chairmen on hold while he fronted his own outfit, Ken Knox and Company. Their stage show featured their own material as well as plenty of Chairmen hits and their popularity on the Beach Music scene meant they enjoyed local hits with songs like ‘Carolina Shuffle’ and ‘I’m Ready Willin’ And Able’.

Ken has now re-convened the Chairmen Of The Board and the trio (Ken, Thomas Hunter and Brandon Stevens) are busy promoting their latest recording – a 7 track EP named for the song ‘Words Left Unsaid’. The song is a beautiful old school ballad and if it reminds you of the glory days of Philly soul, you’d be bob on! The song was written by Philly veterans Mervin and Melvin Steals – the “Mystro” and “Lyric” behind countless Philly classics – while the arrangement comes courtesy of another legend, McKinley Jackson… and that trio “Mac-Mer-Mel” are the producers behind the whole mini collection.

Other highlights include the opening ‘Each Moring I Wake Up’ (a cover of the Major Harris tune), ‘All I Need Is You Tonight’ (originally recorded by Arthur Prysock for Old Town in 1976) and ‘Get Your Lovin” (a long time Beach Music favourite made popular by the Embers). But, if you like good old, proper soul music –the way it used to be – dip in anywhere here and you won’t be disappointed. Retro soul never sounded so good!

The Chairmen Of The Board’s ‘Words Left Unsaid’ is out now on Mo Philly Records and is being promoted by Soul Junction Records in the UK.