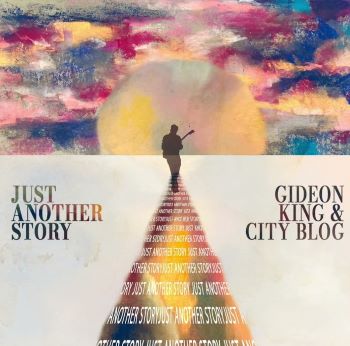 GIDEON KING & CITY BLOG (GKCB) are a New York based Soul/Pop collective. King is a guitarist and he formed the band in 2015. They have a couple of albums and an EP under their belts and musically they meld rock, jazz, soul and pop with some US reviewers making comparison with Steely Dan. That, though, isn’t the flavour on the group’s latest single, ‘Just Another Story’.

The track’s a wistful ballad featuring an ethereal vocal from Alita Moses. King says that the song sprung from a snowy winter evening in NYC. “Nobody could make it to rehearsal that night except for three of us: Bryan Reeder (keys), Alita and myself. When you don’t have enough people to play you might as well write something. And so we did. All three of us shaped the song so it was ready for production. We are proud of this thing and the whole GKCB crew for bringing it to life.” ‘Just Another Story’ is out now and it would be futile to make comparisons or recommendations. King himself is adamant: “I never see the need to tell anybody what a specific composition is about. In the end, the impact and meaning of any song is up to those who listen.  I really hope everybody likes this one. We worked really hard on it.” So, yes, make up your own minds!