ITS GONNA BE ALRIGHT…. 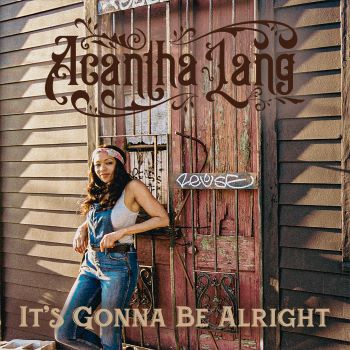 ‘It’s Gonna Be Alright’ is  hardly and original title but it’s the one that New Orleans native  (but now London based) soul singer, ACANTHA LANG has chosen for her latest single.

Born in the Crescent City,  Acantha actually began her music career  in Harlem where she performed regularly with New York’s biggest session musicians at The Harlem Grill for her weekly residency ‘Monday Night Blues’. Seven years ago she relocated to London, put her own band together and started really developing her own sound.

Her acclaimed 2021 debut ‘Sugar Woman’ EP saw the title track land on Spotify’s Best Retro Soul Songs of 2021 while her ‘He Said She Said’ won plenty of support , most notably from Craig Charles.

Acantha’s latest single, ‘It’s Gonna Be Alright’ is a contemporary soul cut  that nevertheless gives a respectful nod to soul’s storied past. (Listen up to the Booker T flavoured Hammond). It’s big and brash and full of optimism. Acanatha says; This song was inspired by my older sister’s struggles with her mental health and specifically after she called me when she was going through a very dark time in her life. I remember talking to her on the phone for hours, telling her “It’s Gonna Be Alright” and that she was loved and not alone. I wanted her to know that I believed in her and to keep her head up no matter what. Shortly after that phone call, I went into the studio with [multiple GRAMMY Award winning] producer, Jimmy Bralower in New York City and wrote the song.”