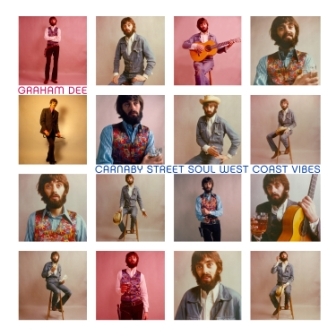 UK muso GRAHAM DEE is a real veteran. Now in his seventies, he began his odyssey back in the 60s beat boom (he worked with Pink Floyd and Jimmy Page amongst others!) and despite some medical issues he’s stayed working in music ever since. His most recent work has been in collaboration with Acid Jazz Records and that’s the label for his latest offering – ‘CARNABY STREET SOUL & WEST COAST VIBES’ which is due for release 31st January 2020.

The Acid Jazz team see the 12 track album as a tribute to Dee’s eccentric charm and his wide ranging, genre-defying music. The album includes a selection of previously unreleased tracks, alternate versions and demos of some of Dee’s earlier work.

Soul fans will be drawn to the sprightly sixties dancer, ‘A Love I Believe In’ fronted by a singer simply credited as Maxine. There’s also a tune called ‘Soul Ride’. Not soul at all –rather a catchy 60s pop ditty from 60s stalwart Mike Berry. Very pleasant … as is the harmony-packed ‘Tomorrow’s Children’ from Brit session star and master of vocal harmonies, Tony Rivers. Mick’s Bunch (no further details) offer a blue-eyed soul cut, ‘I Just Wanna Be Your Friend’, there’s a huge samba groove on ‘Sampaguita’ while elsewhere expect all kinds of everything, making the LP never less than interesting especially for those who, like Graham Dee, like things a little different.