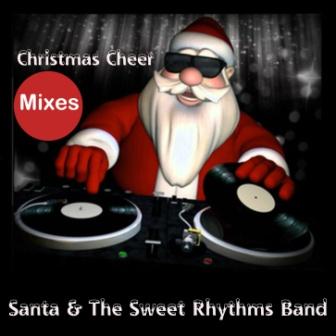 This year a troupe of Brit soul mainstays have gottten together to craft a very special Christmas record to raise funds for the all-important MacMillan Cancer Support charity.

It seems that Solar radio DJ Gary Spence and DSG Records head man, Gary Van den Bussche decided that the time was right for a proper Christmas soul charity tune and to help them sort it they drafted in 2015’s top mixer Nigel Lowis… and so ‘CHRISTMAS CHEER’ from the legendary SANTA & THE SWEET RHYTHMS BAND was born.

The song’s storyline is about how Santa has forgotten to arrange his own party and, yes, the SWEET RHYTHMS BAND come to his rescue! Musically, the tune’s a zipping, Northern flavoured, optimistic dancer that samples and snatches bits from all over the place… I think I can hear the drum roll from ‘Ain’t Too Proud To Beg’ and a bit of Maxine Nightingale’s ‘Right Back Where We Started’ and lots more! You also get a great sax break from Joe Leader. That’s the main mix, but the tune also comes in “Panto” and “DJ Tools” mixes which allow jocks to drop their own messages in!

‘Christmas Cheer’ is available now on iTunes and every penny goes to the MacMillan, Charity, so let’s all try to support it. Thanks.