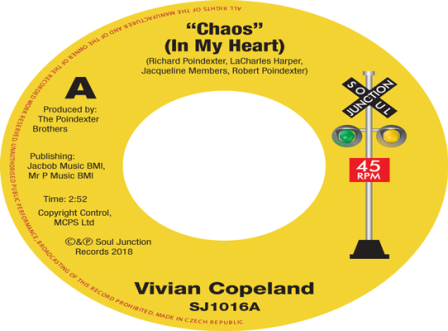 The first single from SOUL JUNCTION RECORDS in 2020 pairs ‘Chaos (In My Heart)’ from VIVIAN COPELAND with ‘What I Did In The Streets’ by the POINDEXTER BROTHERS. The link being that the Poindexter boys (Richard and Robert) wrote and produced the Copeland cut.

Vivian Copeland was active in the 60s and 70s and recorded ‘Chaos’ in 1968 and it was originally released on D’oro Records. Success was limited but (yes, it’s the same old song!), it’s since become in-demand on the rare groove scene… little wonder. It’s beefy and brassy; soulful and “authentic”!

The Poindexter Brothers, of course, are more well-known than Vivian. Hailing from Virginia, they worked the soul circuit as artists/producers/writers through the 60s and 70s. In 1969 they set up their own Win Or Lose label and that’s the source of ‘What I Did In The Streets’ – a dramatic and sparse beat ballad with an unusual and imaginative arrangement. You can probably tell from the title that the lyric tells the familiar soul story of regret and cheating in the next room (or in the streets in this case!).

Sadly the Win Or Lose label lost more than it won! Soul anoraks, though will know that the Poindexters did go on to enjoy success with the Persuaders via ‘Thin Line Between Love And Hate’ and other songs. Here Soul Junction offer the opportunity to see where the boys where at before that success. Out February 17th.