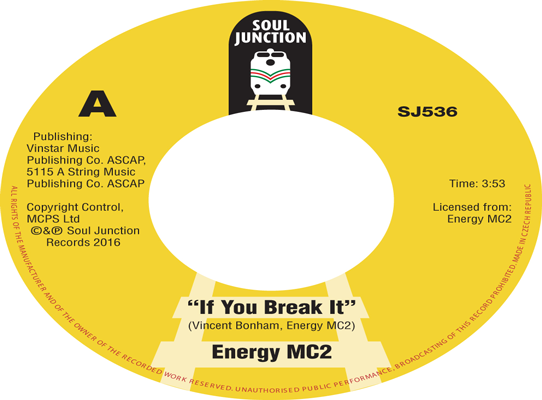 The last release of 2016 from SOUL JUNCTION RECORDS comes from a Detroit band who take their name from Einstein’s Theory Of Relativity… ENERGY MC2!

The band have their origins in a group called Congressional Funk who later merged with Mad Dog and the Pups, a band that recorded for Magic City. Then, after working as the Soulful Hounds they became Energy… the name of the band that a newly recruited bass player, Ben Adkins, had worked with. Identity conflict with that band prompted a name change to Energy MC2.

First up is the quirky ‘If You Break It’… a typical, busy, early 70s Detroit sound with racing bass lines, switched lead vocals and clever harmonies. The putative B-side is the equally engaging ‘Other Side Of The Mirror’ which features great harmonies and some tasty Donald Byrd style trumpet. Both tracks are a little rough around the edges but they make a great addition to the Soul Junction catalogue.

As a footnote, two of the band members (Bonham and Carmichael) went on to join Ray Parker’s Raydio while several of the others got on board George Clinton’s P Funk Mothership!

ENERGY MC2’S ‘If You Break It’/’Other Side Of The Mirror’ is released on Soul Junction 7″ on December 12th.