IT’S ALL BECAUSE OF YOU…. 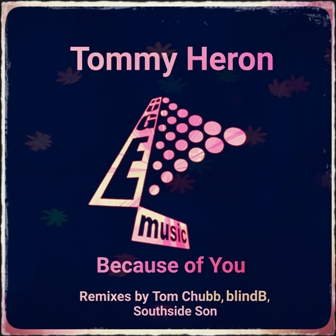 Virtual clubbers will already know a little about ‘Because Of You’ from London DJ/Producer. TOMMY HERON. The tune is building quite a reputation for itself chiefly because of its catchiness, its insistence and its real 80s vibe. Mr H says: “’Because of You’ is a bit of a different vibe to what I usually produce as I got a little tired of sampling the 70s Disco records I usually use and wanted to try to create something more from scratch. I wanted to make something which had a bit of everything 80s in it; an Italo feel with some nice layered synth and a few heavily reverbed snares. I had a lot of fun making it. The remixes are bang on as well, really taking the track off in totally different directions”.

Right now we like the original mix, but for variety there are three other flavours. The “BlindB” version is a tad jazzier with a broken beat feel; the “Tom Chubb” mix doffs its cap at disco; while the “Southside Son” tweak takes the original into deeper territory. As ever, you pays your money…. and you can make up your own minds when ‘Because Of You’ is available via Traxsource promo August 14th with full release August 28th on Huge Music Records.