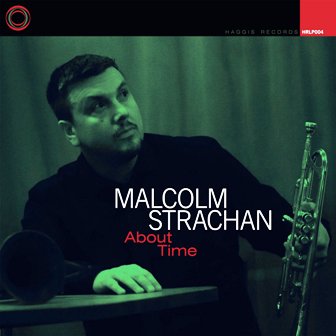 The name MALCOLM STRACHAN might not be too familiar with soul and jazz fans but most of those fans will, we’re sure, have heard of the HAGGIS HORNS. The Haggis Horns were formed way back in 1999 in Leeds and since then they’ve become one of the UK’s top soul bands and trumpeter Malcolm is a founder member. The band has performed sell-out concerts, headlined festivals, played countless sessions and backed numerous visiting soul stars who know they’ll provide a proper soulful backdrop to their shows.

For the moment Mr S is striking out on his own and going right back to his jazz roots. His father was a jazz player and, brought up in that milieu, he grew to love the music of people like Art Blakey and Dizzy Gillespie and, for want of a better phrase, classic modern jazz of the Blue Note era and that’s the sound he’s set out to create on ‘About Time’ – a 9 tracker he’s put together with a core quartet … George Cooper (piano), Erroll Rollins (drums)… both members of the Haggis Horns alongside Courtny Tomas on double bass.

The opening track ‘Take Me To The Clouds’ sets the mood and tone beautifully – a bustler of a tune with each of the players stretching out. Other highlights include the ballads ‘Just The Thought Of You’ and the gentle closer, ‘Where Did You Go’ which really does invoke the spirit of Blue Note… as indeed does the album cover.