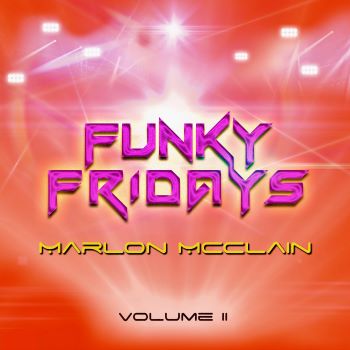 Soul collectors will be well aware of MARLON MCCLAIN . He’s enjoyed a long, successful career which began as leader and guitarist of soul/funk band Pleasure. Marlon has also worked with the Dazz Band and released plenty of classy music in his own right including 1981’s ‘Changes’ LP. As a songwriter Marlon has written songs for artists like Charlie Wilson, Tower of Power, En Vogue, Gerald Albright, Curtis Salgado, Eric Benet and George Benson.

In June, Mr Mc won plenty of plaudits with a fine single, ‘It’s A Gift’  which featured soulful vocals from singer songwriter Nathaniel Starr. It was proper old school – complete with Womack style monologues. We were told that there was an album on it’s way and ‘Funky Fridays Vol II ‘ has just won release – ‘Volume I’ must have passed us by!

The album is a collaborative affair. Amongst the guests is New York based MC and lyricist BD3 who features on 3 cuts – ‘Aint No Stoppin’, ‘Get Down’ and ‘I Want Your Love’ which between them have garnered over 600,000 streams – fine and funky rap tracks.

‘ML Funk’ is  driving instrumental with Randy Scott on sax while ‘Let’s Go’ (with Marlon on vocoder) is a real throwback as is the Prince/Bootsy  flavoured ‘Funkin’ Cause We Wanna’ which has Marlon on lead vocal. Soul standout is still ‘It’s A Gift’ – if you missed it on single release, well worth checking out!