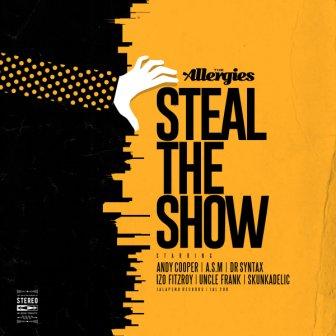 ‘Steal The Show’ is the newest album from Bristol duo, THE ALLERGIES. The pair are old school spinners and beat thieves… DJ “Roy” Moneyshot and DJ “Adam” Rackabeat. They came together in 2010 via their mutual love of classic hip-hop and their debut album was 2015’s ‘As We Do Our Thing’, which fast became 6 Music’s “Album Of The Week” and I-tunes’ best selling hip hop album of the month. Their second set was ‘Push On’ which won the duo plenty of plays and lots of coverage in the music mags and the serious newspapers.

The 13 tracker that is ‘Steal The Show’ continues the momentum and vibe of the Allergies’ first two efforts. Mr Moneyshot says: “We like breaks, funky basslines, horns and dance floor grooves. We’re inspired by the golden eras of funk, soul, disco and hip-hop and we try and cram all that into three and a half minutes”. And you know that is an almost perfect description of each track on ‘Steal The Show’.

Hear the amalgam at its best and toughest on ‘Can’t Keep Working This Hard’ and ‘Dance Now’ – both featuring a funky and feisty unnamed femme vocalist. The crazy closer ‘Samba Fox’ throws in even more (including, obviously, a Rio samba school) but for something a little different try ‘Let’s Drive’…. not quite classic soul, not quite Steely Dan…. but interesting. Indeed the music of ‘Steal The Show’ is almost like lots of other stuff, but, oddly, like nothing else. The album will be available on Jalapeno Records from September 28th.