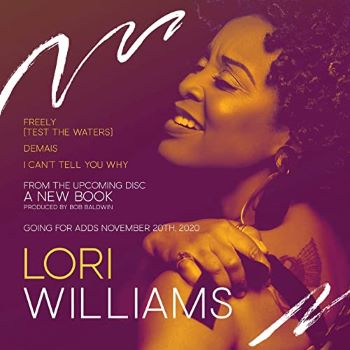 Though she’s not that well known in the UK and Europe, soul and jazz singer LORI WILLIAMS has enjoyed considerable success Stateside.  She’s something of a music biz veteran with a range of skills – acclaimed international jazz vocalist, educator, songwriter, producer and musical theatre actress.

In 2018 she won plenty of new supporters with her smooth jazz/soul collection ‘Out Of The Box’. It was hailed as proper grown-up music and it drew comparison with the best of Anita Baker. The album was co-produced by smooth jazz man Bob Baldwin – a long-time collaborator with Ms Williams and Baldwin is at the controls for Lori’s upcoming new album (the art work – above – suggests it’s called ‘A New Book’) but as a taster Lori is gearing up to release the first single…. ‘New Day’. It’s a gentle piece of sophisticated soul/smooth jazz and will do no harm to Ms Williams’ growing reputation. The Anita Baker comparison will continue, though others might suggest the sound is nearer to Sade. Whatever, it’s full of gentle, soothing charm (nice keys too… courtesy of Bob Baldwin).