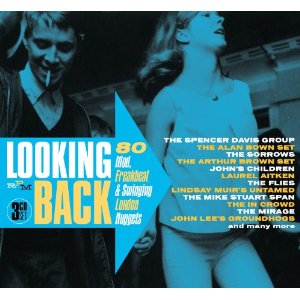 Most proper soul fans have a penchant for mod music; indeed, it’s true to say that many veteran soulsters were original mods, getting their first taste and continued love of soul in that golden age. The good news for all the above is that RPM Records (a Cherry Red imprint) have just issued a tremendous three CD box set of 60’s mod music.

‘Looking Back’ contains a massive 80 cuts of what the set’s subtitle calls ‘Mod, Freakbeat and Swinging London Nuggets’. All the featured artists were British (or British based) and what you get is their unique sixties take on soul and original R&B. Amongst the featured artists are the SPENCER DAVIS GROUP (Mark II, sans STEVIE WINWOOD), THE ARTHUR BROWN SET, JOHN LEE’S GROUNDHOGS, THE IN CROWD, TONY RIVERS, EPISODE SIX and JOHN’S CHILDREN – MARC BOLAN’S first group. There’s also an appearance from the self-styled “King Of Ska”, LAUREL AITKEN (with a rough and rustic ‘Bongo Jerk’) and great cut from Bronx-born soul man, J J JACKSON (‘Come See Me’).

You also get lots of great soul covers like ‘Daddy Rolling Stone’ from Merseybeat band EARL PRESTON’S REALMS and a take on the MAR-KEY’S ‘Last Night’ from the aforementioned LAUREL AITKEN and his band, THE SOULMEN. Lots of modern bands and artists aspire to create an authentic 60s sound but never quite get it right. With this wonderful collection as a primer they would, I’m sure, have much more success. Find out more @ www.cherryred.co.uk