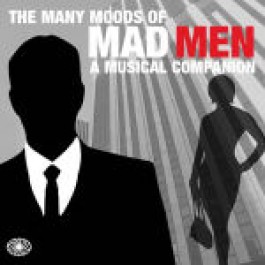 Without doubt one of the most successful and talked about TV series of recent years has been ‘MAD MEN’. Based around the rise of modern advertising in the 50s and early 60s and set in a go-getting Manhattan agency, the MATTHEW WEINER created series won the hearts of both the critics and the public. One of the reasons for the acclaim was the painstaking attention to period detail – the costumes, the hairstyles, the decor, the speech idioms and much more were all painfully realistic.

Integral to the series’ success and adding to the accurate sense of time and place was the music – always well-chosen, it fleshed out and added atmosphere to the key scenes and added to the authenticity.

FANTASTIC VOYAGE RECORDS have just released a wonderful 2 CD, 51 tracks CD that pays homage to the music of the ‘Mad Men’ series. Though not an actual programme soundtrack each selection has been chosen with care – collectively charting the period sounds that featured throughout the first five series of the show. Evocative and entertaining, the collection covers four decades of pop and jazz and is a perfect musical accompaniment to the series.

The featured music includes some embryonic soul from the likes of ETTA JAMES, BABY WASHINGTON and the CRYSTALS along with plenty of jazz from artists like MILES DAVIS, THE BUD POWELL TRIO and ELLA FITZGERALD. The accompanying booklet – compete with period ads – sets the music in its context, making the package a great companion to the series.