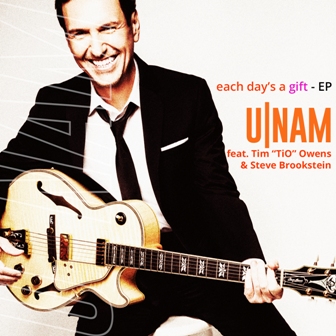 Earlier this year smooth jazz/soul guitarist U-NAM released an intriguing album…. ‘U-Nam Goes Big Band’.  The LP was a collaboration with Estonia’s Lutz Krajenski Big Band and the repertoire was made up of well-known Estonian pop songs. Sounds odd… yes, but it worked and worked so well that U-Nam went on to issue four of the tracks in a set of new, innovative remixes on EP

One of the original album highlights was a Latin-tinged, lounge jazz kind of thing – ‘Each Day’s A Gift’ which featured the vocals of Steve Brookstein (remember him from the first X Factor?). Now U-Nam liked the message in this song so much (a reflection on the way we’re shaking off the shackles of Covid 19) that he went back into the studio and remixed it yet again…. this time with soul man Tim “TiO” Owens at the mic and between them they’ve transformed the song from a smooth jazz outing to a solid modern soul groove that has hints of George Duke mingled with classic EWF!

The new mix is the centrepiece of U-Nam’s latest EP… which offers 6 versions of ‘Each Day’s A Gift’… the two vocals mixes and the Benson-esque instrumental and their respective radio edits. It’s released July 13th