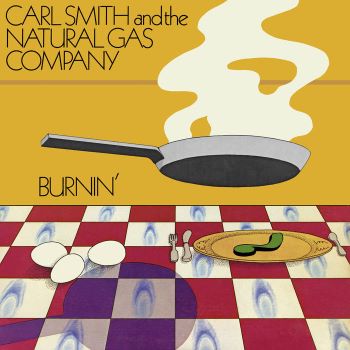 We’ve lost count over the last few months of properly rare and in-demand discs winning reissue to thwart the speculators and to satisfy the demands of collectors who aren’t that precious about having an original pressing.

Latest collectable to get this reissue treatment is a 1980 long player, ‘Burnin’’ by CARL SMITH AND THE NATURAL GAS COMPANY and as is often the way with rarities there’s quite a story behind this record. The band in question it seems has a long pedigree. They date back to 1959 whhen they were simply the Carl Smith Orchestra and over time they became quite a fixture on the Portland music scene eventually moving away from big band jazz and R&R to a funkier, jazz/soul sound. Amongst the band’s alumni are trumpeter Chris Boti and Jefferson Airplane’s Signe Anderson.

The band recorded sporadically and in 1980 they struck a deal with an Oregon label, Match Box Recordings. The result was the 10 track ‘Burnin’’. On release the LP did reasonably well locally but it seems that Carl and his  gang were being scammed. It appears that Match Box Recordings was a sham label – set up by a group of local farmers using the label as a front to show tax losses. So, as soon as ‘Burnin’’ started to make some kind of noise, the shady label bosses pulled it and liquidated all known copies.

All that, of course, means that as time slipped by, Carl Smith’s ‘Burnin’’ has become a collectors’ item – now fetching upward of $200 on auction sites! Step in bbe Records who are all set to reissue the album for a modest outlay. And what will you get for that modest outlay? Well, the long player is a workmanlike, typical late 70s funk and soul outing mixing funky instrumentals with female led vocal tracks (the singer, we believe was Smith’s daughter, Carlee). Of note is a cover of Quincy Jones’ ‘Stuff Like This’. The sound is punchy and frantic and in places quirky, odd even. It seems that the Match Box label producer/engineer didn’t have much of clue and the tape reels were set too fast and consequently everything was pitched too high. The bbe people advise dropping the pitch control on your new-fangled turntable!

CARL SMITH AND THE NATURAL GAS COMPANY ; Burnin’ will be released on bbe Records on May 14th on double LP, CD and digital.