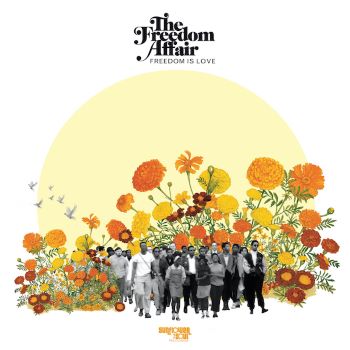 Don’t know too much about a new Kansas City based soul ensemble, THE FREEDOM AFFAIR but on the strength of their debut album, ‘Freedom Is Love’ I’m confident we’ll all be hearing a lot more about them very soon.

The group is a big affair indeed … the line-up is Misha Roberts – Vocals; Paula Saunders – Vocals; Seyko Groves – Vocals; Cole Bales – Guitar, Sitar; Branden Moser – Guitar; Chris Hazelton – Bass Guitar, Organ, Tambourine, Glockenspiel & Chimes; Dave Brick – Drums; Pete Carroll – Trumpet;  and Brett Jackson – Tenor Sax, Baritone Sax & Tambourine. On ‘Freedom Is Love’ they’re joined by assorted guest strings and percussionists and the “Freedom Choir” and between them they make quite a sound… an intriguing mix of soul, pop, funk and gospel that in places reminds me of Rotary Connection  while elsewhere (on the sweeter sides) the reference point is the Fifth Dimension. Interestingly producer Chris Hazelton used the best of vintage and new recording technologies to create an experience befitting of a soul record that would have been relevant 50 years … the era of those two aforementioned great bands. However, the Freedom Affair’s messages are hugely relevant to today’s issues and those messages and their delivery will still be relevant 50 years from now.

Most obvious of the “message songs” is the hard hitting ‘Don’ Shoot’ but if you want something lighter try the sweeter ‘Outa My Mind’. Album highlight, however, is the album closer, ‘Love Liberates’ which encapsulates the band’s mission statement … essentially, true freedom comes through love which is always stronger than ego. Sonically the song begins with simple piano accompaniment in the manner of, say, Oleta Adams before some moving spoken word passages prior to a gospel-esque climax. It brings an intriguing and questioning album to a fitting conclusion. It’s out now on Sunflower Soul Records.