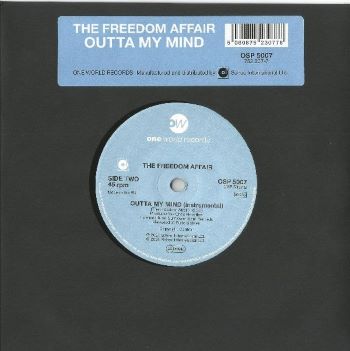 In our review of their debut album, ‘Freedom Is Love’ we described their sound as “an intriguing mix of soul, pop, funk and gospel that in places reminds me of Rotary Connection  while elsewhere (on the sweeter sides) the reference point is the Fifth Dimension.” Yep, a lovely sound altogether!

Track wise we highlighted the beautiful ballad, ‘Love Liberates’ which encapsulated the band’s mission statement … essentially, true freedom comes through love which is always stronger than ego. We also recommended the hard hitting ‘Don’t Shoot’ and the sweet and lovely ‘Outa My Mind’.

Now proving that someone out there reads all this rubbish, ‘Outa My Mind’ is “due to huge demand!” winning release as a 7” single by ONE WORLD RECORDS. It is a lovely summer soul confection and  comes hugely recommended and it might also encourage you to investigate the parent album and, hey, maybe one day someone will release the wonderful ‘Love Liberates’ as a single. I guess I’m being too optimistic there – dare I say it, it’s maybe too classy and too soulful for mass consumption (and it lasts over 6 minutes – so goodbye to radio plays!)

In the meantime, enjoy the Freedom Affair’s Outa My Mind’ single which is released on One World records on July 16th.