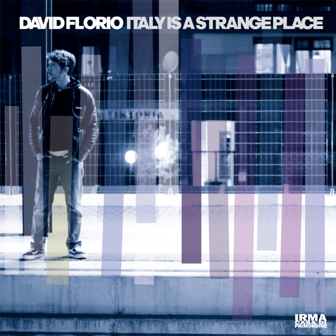 ‘Italy Is A Strange Place’ is the latest album from Milan born multi-instrumentalist, author, composer, producer, arranger and vocalist DAVID FLORIO. The title, he says, is down to the fact that Italy and Italians don’t seem to want to share/enjoy/enhance the music he and like minded musicians produce. That music, by the way, is a mix of soul and jazz garnished with pop and Latino flavours… the kind of thing crafted by people like Mario Biondi, if you would.

And it’s no coincidence that Florio has worked with Biondi. After working as a song writer and recording as “Nino Moroni”, David hooked up with Biondi in 2011 and has collaborated with him on and off over the subsequent years. Our man has also worked with good old Bluey Maunick.

Now Signor Florio has decided the time is right to strike out on his own again with the 11 tracker that is ‘Italy Is A Strange Place’. The songs, we’re told, were all written and worked on over the last decade and they offer all kinds of flavours. The most immediate/accessible track is the sweet and lovely soul groove, ‘Have A Good Day’. As the title hints, the song is brimful of harmonic optimism… classic blue-eyed soul…kind of Steely Dan meets Tower of Power! Take My Heart With You’ is another album highlight. Its mines a similar blue-eyed soul groove.

The flavour is decidedly Latino on the strutting ‘Conviction’ and there’s a Latin undertow too on ‘Because Of You’ while on ‘Power Of Mind’ we jet over to the Caribbean. ‘Doce Doce’, a lounge jazz number, is the only Italian language song…  which brings us to the LP’s title track. It’s on the album twice – the original mix and radio edit and it’s a brash, brassy workout which essentially says it’s hard to understand where the Italians are actually coming from! If you want to help to try to sort out the Italian enigma, the album’s out now on Irma Records.