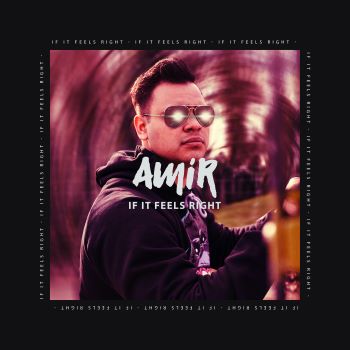 Of Iranian heritage, AMIR is a UK singer/songwriter who’s worked hard to deal with the various hardships his Asian background has thrown up. He tells us that his first experiences in the music biz saw various teams attempting to have him conform to perceived ideas of “British Asian” artists.

Amir quickly side stepped all that and started to carve out his own way forward – a way that saw his tunes ‘All Or Nothing’, ‘Drench Me With Your Lust’ and ‘Freak Of Nature’ winning him a nomination as a “BBC Backed Artist” and a spot on the BBC Glastonbury stage.

You can check out our man’s progress via his latest single, a buoyant, bouncy ‘It Feels Right’. The tune has real crossover appeal in the way that (dare we say this?) Michael Jackson’s music did. Catchy, tight beats, a little poppy for sure but with its roots in up-tempo soul there’s nothing not to like!