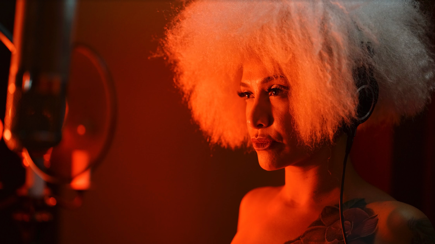 Once in a blue moon, a singer comes along that stops you in our tracks. LADY BLACKBIRD is one such talent. Her voice, a smoky distillation of Roberta Flack, Nina Simone and Cassandra Wilson, is truly mesmerising. The Los Angeles-based chanteuse was born Marley Munroe but after an epiphany in a recording studio often used by Prince re-invented herself. Explains the singer: “Being in the legendary Studio B, in Sunset Sound with my band and my producer Chris Seefried was a ground-breaking moment for me as an artist. It helped me find a way to express who I am now and marked the rebirth of me as Lady Blackbird.”

Appropriately enough,  Lady Blackbird’s debut single is a stunning cover of Nina Simone’s ‘Blackbird,’ and is released today. She infuses the song with sultry soulfulness as well as a brooding intensity. Noted DJ, record company boss, and tastemaker, Gilles Peterson, is bowled over by Lady Blackbird, describing her as “a singer that blew my mind…incredible.”

‘Blakbird’ is a taster from the singer’s 13-track album, ‘Black Acid Soul,’ which is set to follow in the autumn. It was produced by Chris Seefried, former front man for Gods Child and Joe 90, whose production credits include Lana Del Ray, Anderson East, Larkin Poe and Trombone Shorty.  Among the album’s featured musicians is erstwhile Miles Davis pianist Deron Johnson.

‘Blackbird ‘ is available now to stream and download and is released via Foundation Music.