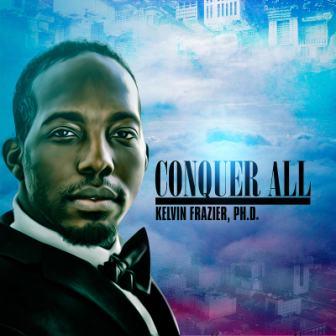 The Los Angeles-based, singer-songwriter, KELVIN FRAZIER, is currently making waves Stateside with his single ‘Marked And Scarred’. The tune’s a heavy R&B ballad that allows Kelvin to show off his gospel–reared range… he’s currently a member of CaliWorship Mass Choir which has sang backup for Grammy Award-winning singers such as Tina Campbell, Erica Campbell and Grammy nominee singer Anthony Brown.

‘Marked And Scarred’ is one of 5 cuts on Mr F’s soon to be released EP, ‘Conquer All’ on Top Notch Records. The other four tracks plough a similar sonic furrow…. that’s to say they’re all love ballads with, I think, a Brian McKnight flavour about them. The breathy ‘1+1’ is the most interesting in the way that it’s been stripped back allowing the voice to do all the work.

By the way, if Kelvin’s singing career doesn’t take off, he can always go back to his original career. The young man has a Ph D in Chemistry and a reseach career beckoned before music came a-calling!