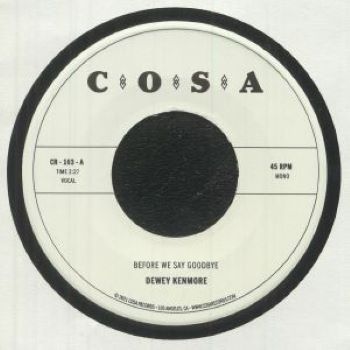 Fans of the more esoteric end of the soul/funk spectrum might well want to investigate a couple of tasty releases from labels within the COLEMINE circle.

First up there’s a cute and catchy ‘Before We Say Goodbye’ from DEWEY KENMORE.  His people describe the sound as a “blend of west coast Latin soul” which would “perfectly suit a a lazy afternoon in the park or contemplating a relationship on the rocks”. That’s up to you to decide but what we can say is that the sound is simple but subtle and it ticks all kinds of boxes. It’s out now via COSA RECORDS.

Switching labels now to 3 PALM RECORDS, there’s something very different from tough funk band, ORGONE  who offer their album, ‘Lost Knights’. Their people say the LP “is a collection of heavy-duty psychedelic funk-rock anthems created to be played loud and raucously.” That just about sums it all up. The cover art (above) says a lot too! The release features lead vocal contributions from Orgone’s ever expanding extended family of some the finest soulful singers on the West Coast – Terin Ector, Jamie Allensworth, Phil Diamond, with special appearances from Jesse Wagner (The Aggrolites) and Kelly Finnigan (Monophonics). A first of sorts, for the band, in featuring an all-male fronted line-up on an album.

Focus cuts are the rambling ‘Hazel’ , the furious, garage inspired  ‘Wicked Karma’ and the ponderous ‘Samson’. Out now!