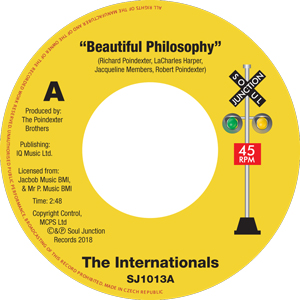 The latest 7″ vinyl single from collectors’ label SOUL JUNCTION pairs two tracks from THE INTERNATIONALS… ‘Beautiful Philosophy’ and ‘Too Sweet To Be Lonely’. Soul anoraks will immediately prick up their ears… they’ll know that the Internationals were an early incarnation of classic harmony group The Persuaders!

The story goes something like this; In the 60s brothers Richard and Robert Poindexter were picking up plenty of writing credits in and around New York City. There they “discovered” a singer by the name of James “B.J.” Barnes but felt he needed group support to really make it. So three singers (including Douglas “Smokey” Scott) were brought in to add beef to Barnes. The quartet cut three tracks for the Poindexters ‘Give A Damn’, Push Button Love’ and ‘Beautiful Philosophy (Of Love)’. Using the name The Internationals, the Poindexter brothers issued ‘Give A Damn’ and ‘Push Button Love’ as a single on the D’Ar label. This was followed by ‘Too Sweet To Be Lonely ‘b/w ‘Beautiful Philosophy’ but neither single made much impact and the Internationals split though BJ Barnes and Smokey Scott decided to keep on trying and with Charles Stodghill and Richard Poindexter himself they formed the Persuaders. Richard was a reluctant member and he later stood aside for Willie Holland.

So Persuaders fans in particular and soul group collectors in general will, be delighted to have the opportunity to grab a copy of the ultra rare, highly collectable ‘Sweet To Be Lonely ‘b/w ‘Beautiful Philosophy’. ‘Sweet’ is well, “sweet” and smooth and rippling with the sharp harmonies that were to become a Persuaders trademark. ‘Beautiful’ is faster and features the same soulfully pleading lead voice floating over the same on point harmonies. In places the harmonic hook might remind you of the Intruders ‘United’.

THE INTERNATIONALS: ‘Too Sweet To Be Lonely ‘b/w ‘Beautiful Philosophy’ is out next week on 7″ vinyl on SOUL JUNCTION.