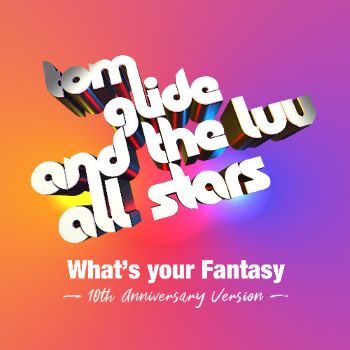 Just the other week we opined that we hadn’t heard too much recently from TOM GLIDE, then he popped up with a lovely remix of Castella’s ‘So Glad I Met You’.

Now like those proverbial London buses, Monsieur G  is back with another release – this time one of his own!

Back in 2011, our man released his acclaimed Tom Glide and the Luv All Stars album and over the last few years he’s revisited some of the set’s songs. We’ve had new takes on ‘Luv is Coming Up’  and ‘Get It Off’ and now Tom goes for his hat trick with a new working of ‘What’s Your Fantasy’.

This new ‘Fantasy’ has been re-arranged and re-recorded with a new line up musicians, a rap (Michael Coppola), a spoken intro and new vocals on which Devin Brunel duets with the original Tim Owens track…very clever. Tom calls  this  new iteration “a return to the future, celebrating togetherness”. See if he’s right by investigating via your usual platform… it’s out now!