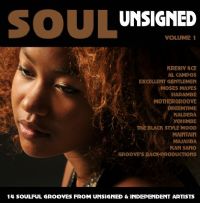 Season of mists and mellow soulfulness … indeed! Autumn brings a bumper harvest festival of indie soul goodies. Expansion start things off with a great crop – including the 2008 ‘Soul Togetherness’ collection, KLOUD 9’s ‘Enjoy The Ride’ and MAYSA LEAK’S ‘Metamorphosis’ … also available on import through Shanachie, that one. Dome have their fifth ‘Soul Lounge’ box set on offer – three CDs and 40 great tracks, including brand new recordings from FULL FLAVA and REUBEN’S THREAD. PHIL DRIVER’S Soul Unsigned set-up release their first full album …imaginatively-titled ‘Soul Unsigned Volume 1’ … 14 great, new indie soul cuts in there. As intriguing is SOUL:ID’S ‘Sex, Love And Philosophy’, and for those who collect female soul, ‘Independence Day’ from INDEPENDENT SOUL DIVAS is a must. Featured vocalists there include LeNORA JAYE, NIKOLE HALL, RENE JONES, CHANEL PERRY and STACYE BRANCHE. More esoteric, maybe, is ‘Make The Road By Walking’ from the MENHAN STREET BAND on the Daptone spin-off label, Dunham. REEL PEOPLE’S acclaimed ‘Seven Ways To Wonder’ set gets a revitalised release with a whole raft of remixes, while if you like your soul a touch smoother try WAYNE BRADY’S remarkable ‘A Long Time Coming’ on Peak Records. Finally SHANTEL’S Mo-Philly album ‘Arize It’s Time To Shine’ will get a December release. In the meantime the lady’s single, ‘It’s Over Now’ will be available from mid-November. Full reviews on all these on www.soulandjazzandfunk.com very soon.