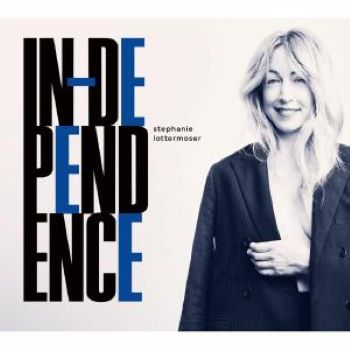 STEPHANIE LOTTERMOSER is a German  jazz/fusion saxophonist and occasional vocalist. Now based in Hamburg, we were introduced to her talents last year with an album named for and dedicated to that city. For her latest album, Fraulein Lottermoser offers another “themed” long player. It’s called ‘In-Dependence’ and she tells us that the set is “about the aspiration for independence in all aspects of life. Finding your own voice, to deal with setbacks, and to generate strength from those experiences”. She adds: “Complete independence is virtually impossible. We are all part of certain structures and operate within them. This already starts in our childhood. There are dependencies in social systems such as school, university or training and in all interpersonal relationships in general – and these pervade our entire lives.”

Well, that’s the philosophy, but what about the music? Like ‘Hamburg’, ‘In-Dependence’ is a mix of vocals and instrumentals offered across a range of jazz/soul/pop shadings. All the vocal cuts are pleasant and I’m sure that Stephanie would be the first to admit that her voice is more “pop” than “soul”. However what adds depth and punch to the vocals is the sensuous sax playing and  the tight soundscape crafted by her “engine room” – Maik Schott (keys), Martin Ziaja (bass) and Felix Lehrman (drums). Nowhere is that more apparent than on the album opener, ‘Love Again’ – a gentle pop  ramble given heft by Steph’s warm sax. Perhaps the meatiest vocal track is ‘Gotta Do Something’ – this is substantial offering with a funky undertow.

Of the instrumentals, three have a distinct, throwback soul-jazz vibe. They are ‘About The No’  and ‘Bring Your Sunshine’ (great Hammond/sax interplay on these) and the slow groove ‘Ikigai’. The album’s title track is a sombre builder while ‘Choices’, after a slow opening, builds and builds into something almost frantic and free. The set closes with a bright and accessible ‘Entreé (Porte Tournante)’.

As happened with ‘Hamburg’, it’s hard to see how some of the tracks fit with the mission statement behind the recording, but (again like ‘Hamburg’), ‘In-Dependence’ does offer a mix of jazz/fusion sax-led sounds and songs with soul/funk aspirations. Ms. Lottermoser’s people tell us “Jazz is an allegory of life. It is true for both that achieving independence is a long process. This is the story of ‘In-Dependence”. Now we know.