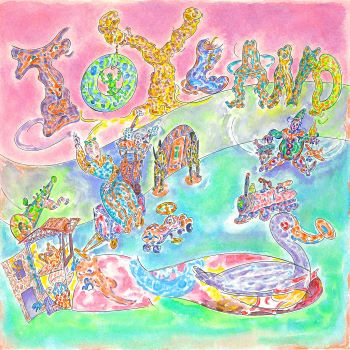 Fancy something a little different this Christmas? Something a little darker, a little more intriguing as we approach the 25th? Yes – then may we point you to a new single  from the PUBLIC DOMAIN music collective. Their offering is ‘#Toyland’ and it features quite  a line up – Ray Angry, Questlove, Black Thought, Marcus King, Pino Palladino, Liv Warfield and Ian Hendrickson Smith and Dave Guy of the Dap-Kings on horns.

The song ‘#Toyland’ has an intriguing and odd provenance. It first appeared way back in a 1903 light opera called ‘Babes In Toyland’, written by Victor Herbert and Glenn McDonough. The aim of the core team at Public Domain (Ray Angry and Katherine McMahon) is to take “expired copywritten material (material in the public domain)  and to sculpt it into a contemporary narrative about the cyclical nature of history while exploring generational shifts and the notion of ownership.”

Thus, they re-envision the original wistful ‘Toyland’ into an exploration of childhood and loss of innocence. With R&B beats, a soulful vocal and apposite rapping the tune is dark and broody, spiritual and psychedelic. Angry and McMahon say that their ‘#Toyland’ ”expounds on the sentiment that through spiritual self-exploration and rebirth, you don’t necessarily return the same person”. Quite different to how the song was first conceived, I’m guessing … but that’s the point of Public Domain.

The song’s provocative video was directed by Tatjana Krstevski while the single’s artwork (above) was designed by Efram Wolff who also did album art for Stevie Wonder’s ‘Innervisions’ as well as album art for various Motown records in the 1970s.