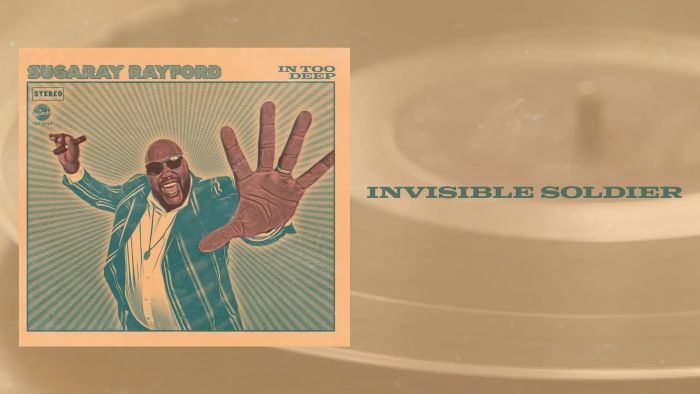 Here @SJF we’ve followed the career of Texas-born blues and soul man SUGARAY RAYFORD with real interest  since 2017 when we discovered his album ‘The World That We Live In’. Released on Italian label, Blind Faith, the long player won plenty of friends in the soul community … people who respect old school values of passion, commitment and gospel-reared vocals.

Since then we’ve enjoyed his 2019 ‘Somebody Save Me’ LP – another set of old school soul. And like those old school soul classics the album is a well-balanced mix of straightforward love songs, social comment, ballads and up-tempo items.

We’re pleased to report that Mr R is planning a new album release…. ‘In Too Deep’ but, sadly we’ll have to wait till March next year to enjoy it! However, to whet appetites the big man (he’s 6ft 5!) has just released a provocative single from the set…. ‘Invisible Solider’ . We say “provocative” because  the song is inspired by Rayford’s struggles with insomnia from PTSD. The track serves as a reminder that our urban communities are full of veterans struggling with the aftershocks of war and how it’s invisible to most fellow citizens because those old soldiers are not in military garb! Sonically the track is powerful – befitting the message in the music while Sugaray’s old school soul voice is magnificent in the way that Bobby Bland’s always was.  A sneak preview of the upcoming ‘In Too Deep’ reveals plenty more old school treasures but we’ll need to wait. Yes, patience is a virtue!