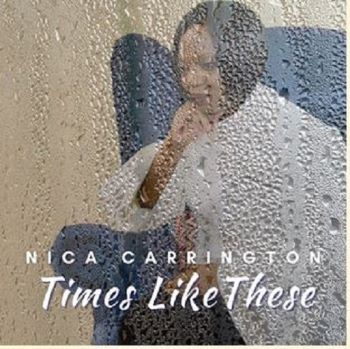 NICA CARRINGTON is a New York born jazz singer and she’s just released her debut album, ‘Times Like These’. Nica, we’re told, grew up with jazz. Her father was an enthusiast and worked in music promotion. She says: “My dad had a lot of musician friends who would often drop by our house, and jams could break out at any time.” Consequently, she was bitten by the bug but preferred singing in choirs rather than stepping into the spotlight as a solo performer…till now.

During the lockdowns, Nica went online to find some vocal coaching and found John Proulx, a Los Angeles-based popular singer, pianist, composer, and recording artist. He is also an in-demand jazz voice, piano, and arranging instructor and the pair hit if off right away, and John convinced her that that the time was right for her to break out on her own and record a solo album. So with Proulx in the producer’s chair and on piano and with Chuck Berghofer on bass and Joe Labarbera on drums, ‘Times Like These’ was born.

The album is a gentle, 9 track collection of new interpretations of songs from the Great American Songbook and Ms Carrington delivers them with total respect in her distinct warm and soulful voice. So here you  can enjoy classic songs like  ‘When Sunny Gets Blue’, ‘Ev’ry Time We Say Goodbye’, ‘We’ll Be Together Again’, ‘You Don’t Know What Love Is’ and  ‘The Shadow of Your Smile’ and together they offer a relaxing and intriguing listen… perfect dinner jazz.

The songs were chosen for their narrative qualities. Nica is a particular fan of Frank Sinatra: “I fell in love with Sinatra when I was 10 years old. I really liked his album ‘Only The Lonely’ and would drive my sister crazy by playing the title song over and over again. I loved his phrasing and ability to tell a story without vocal acrobatics. I didn’t realize until fairly recently how much of Sinatra’s style that I internalized.”  And that “telling a story without vocal acrobatics” is the hallmark of Nica’s LP making it  not just another covers album; rather, her own an eloquent personal statement sung with a very contemporary edge.

NICA CARRINGTON; Times Like These out now. Find out more @     https://www.nicacarrington.com