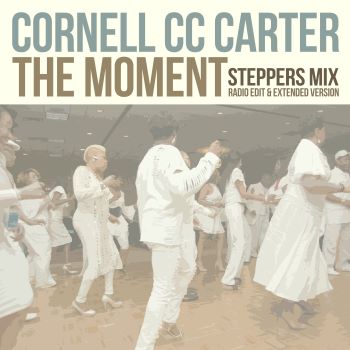 By common consent, CORNEL CC CARTER’S ‘Next Life’ album was on of 2021’s best long players. In a year that saw the release of plenty of great contemporary soul, ‘Next Life; really stood out. It was a varied mix of sweet, emotive ballads like the delightful CC cover of Heatwave’s ‘Sho’ Nuf’ and the head-nodding, foot tapper ‘Not Possible’.  One of the tracks that really did win the hearts and souls of the discerning was the Norman Whitfield/Marvin Gaye flavoured ‘The Moment’ – a striking example pf Mr. C’s art – a modern take on classic soul.

Demand for the cut has encouraged CC’s team to have ‘The Moment’ remixed by Team Kizzo (who work in and around San Fransico’s Bay area) and Cornell himself. They’ve come up with a delightful Steppers Mix – possibly the smoothest, Steppers dance groove you’ll enjoy this year. It really is that good and underlines what a real soul talent that good ‘ole CC is – and to think that for years he was hiding his light under the backing singer’s bushel! (Remember he’s worked with people like Ray Charles, James Brown, The Whispers, The Temptations, Natalie Cole, Kool and the Gang and Narada Michael Walden!).

Since 2016 he’s been out front on his own, emerging as a proper soul contender. The Steppers Mix of ‘In The Moment’ continues his upward and onward soul trajectory. It’s released on February 4th on all digital formats!