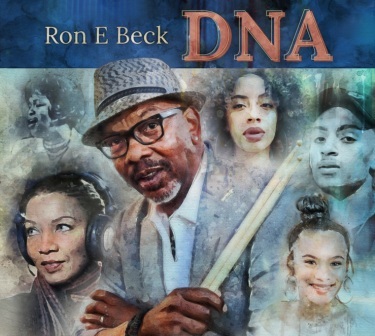 Avid soul sleeve readers might recognize the name RON E BECK. The Omaha-born drummer has played and worked with plenty of big names on the road and in the studio. Most famously maybe he was with Tower of Power for three seminal years but he’s also worked with Marilyn McCoo and Billy Davis Jr., Bobby Womack, John Lee Hooker, Thom Bell, Sylvester and 2 Tons of Fun, Bill Withers, Dr. Lonnie Smith and Fred Wesley (that’s just a sample from his CV!)

Ron now works out of North California where he runs the Ron E Beck Drum Institute (ReBDI) while still playing live and recording. Right now he’s busy promoting his fifth solo LP – ‘DNA’, an unusual and interesting project. You see Ron calls the 13 tracker his “legacy project” – a sort of family tree and a celebration of kinship and true to that idea many of the artists on the set are members of his immediate family … his Mom, Jeanne Rogers, his twin brother Donnie, 1 of his 3 daughters and 3 of his grandchildren.

With such an age span amongst the contributors, the music encompasses all kinds of genres. Here there’s jazz, R&B, soul, hip-hop, neo-soul, gospel and a lot more! One of the key tracks is ‘Doin’ The Best I Can’ which takes us back to Ron’s childhood and the simple, honest philosophy to do your very best that was his mother’s mantra! Musically, it’s a sweet mid tempo soul groove . ‘Lonely Hearts’ is another soul highlight – reminiscent of the great harmony groups like the Whispers … no coincidence, Ron has worked with them many times! As enjoyable are takes on the standards ‘The Nearness Of You’ and ‘Moonlight In Vermont’ – oddly cheek by jowl with the rapping of ‘Day 1ne’ . It all adds to the interest of ‘DNA’ which is out now on California’s ReBec Records.