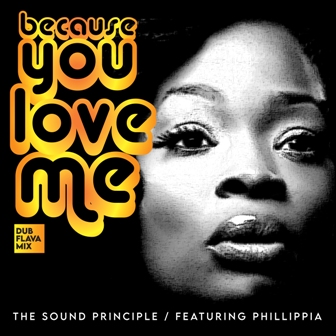 It was March 2017 when we first enjoyed ‘Because You Love Me’ from ERROL HENRY’S SOUND PRINCIPLE. Fronted by Miami born, Atlanta based vocalist Phillippia Williams, the cover of the Shirley Jones song was rightly hailed as a modern British soul classic. Then came a series of mixes. I counted four alongside the original tweak with the booming “joyful” mix proving a big club fave!

Now three years down the line, Errol has revisited the song again. He says he inspiration for his new “dub flava” mix came after he started reflecting on his early music biz career  at Paddington’s Addis Ababa studios which  was the place to be for pretty-much anyone who was making reggae music at the time. So the new ‘Because You Love Me’ has a distinct reggae flavour – but with a twist. Mr. Henry explains: “Being raised by Jamaicans in South London shaped my core belief that rules were designed for other people to obey, so needless to say; The Sound Principle’s take on reggae breaks many rules! Our “dub flava” mix of ‘Because You Love Me’ is an eclectic fusion of old-school reggae, lush strings, stunning ‘diva’ vocals, plus some wonderful jazz guitar licks.”

He adds that it shouldn’t really work but take from me …. it works… and how! It’s a wonderful confection that will, for sure, bring a smile to your face and get those feet tapping and heads nodding… a perfect late summer vibe and it’s out now via Intimate/i2… don’t miss it!