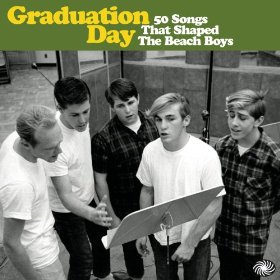 Over the last few years there’s been any number of compilations that purport to show the roots and influences on various music superstars… you know the kind of thing – ‘The Songs That Shaped The Beatles’, ‘The Roots Of The Rolling Stones’ and so on. To the best of our knowledge there hasn’t been one devoted to the Beach Boys – till now as Fantastic Voyage records release a great 2 CD, 50 track collection entitled ‘Graduation Day – 50 Songs That Shaped The Beach Boys’

Yes, SJF wouldn’t normally feature the Californian icons but listening in to the collection it comes as a bit of a surprise how many black artists had an impact on the Wilson brothers and their cousins. Amongst the music here are The Robins’ ‘Smokey Joe’s Cafe’, The Olympics ‘Hully Gully’, Ella Fitzgerald’s ‘I Got Rhythm’, The Coasters’ ‘Young Blood’, The Drifters’ ‘Money Honey’ and plenty from the Phil Spector stable and Chuck Berry – two rather obvious influences.

GRADUATION DAY – 50 SONGS THAT SHAPED THE BEACH BOYS is out now on Fantastic Voyage Records.