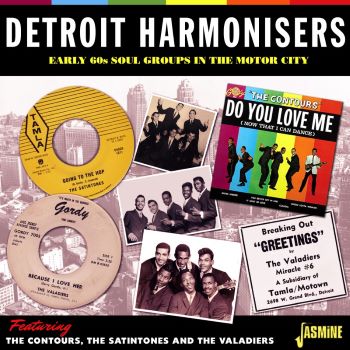 The latest soul compilation from archive label JASMINE RECORDS is a lovely 25 tracker that turns the spotlight on  three early Motown groups – THE CONTOURS, THE SATINTONES and THE VALADIERS.

The disc is called ‘Detroit Harmonisers – Early 60s Soul Groups in the Motor City’ and for Motown collectors and fans of early soul, it’s essential fare, though, I have to say that the album throws up few rarities. There are no previously unissued tracks and indeed most of the music is reasonably easy to find and has been reissued many time before, so I guess  those collectors will already have this music. That said, it’s good to have the music in one place like this and at a reasonable price.

For the record, there are 12 Contours’ tracks and you can probably guess what they are. All pre-1962, so, of course,  ‘Do You Love Me’, ‘Shake Sherrie’, ‘You Better Get In Line’ et al. The Satintones’ 11 tracks are more interesting and include their answer to The Shirelles’ ‘Will You Love Me Tomorrow’, ‘Tomorrow And Always’ and their Detroit tribute, ‘Motor City’. The Valadiers contribute 4 tracks with the most interesting probably being their early version ‘Greetings (This Is Uncle Sam)’ which later  became a hit for the Monitors.

‘Detroit Harmonisers – Early 60s Soul Groups in the Motor City’ is out now via Jasmine and boasts a great vintage cover!