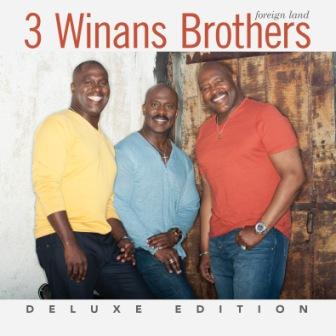 Over the years proper soul seekers have moaned more and more about the dearth of real, new soul music. The savvy ones amongst them have long realized that the place to go to find the soul solace that you’re seeking is Gospel.

And that’s the source for what is shaping up to be one of 2015’s biggest soul albums…. ‘Foreign Land’ by the 3 WINANS BROTHERS. The long player brings together the three multiple Grammy winners BeBe, Marvin, and Carvin Winans, as one group for the first time and the result is some magnificent music… little wonder that the album scaled the Billboard charts on US release.

In the States the album was heralded by the single, ‘I Miss You’, – penned by BeBe in memory of the Winans’ late brother Ronald and first performed following Marvin’s emotional eulogy at Whitney Houston’s 2012 funeral. It remains a gem and comes in both the original format and a special “Soul Mix”… as if the original wasn’t soulful enough!

There are plenty more album highlights on the album with the wonderful ‘Just Between Me And You’ taking podium position. It’s a great song – stuffed with old school values and a jazzy undertow. Hear hints of Stevie Wonder, Bacharach style muted horns and a vocal that dear old Luther would have been proud of!

If you want things more up-tempo, the go-to track is the obvious ‘Dance’. Featuring the Clark Sisters, the tune has already done massive business in the clubs via a number of exciting Louis Vega mixes… you need to check ’em out!

Other album goodies include the harmony-rich title track, the lyrically clever ‘Move In Me’ and the ‘Higher Ground’ flavoured, ‘I’m Not Ashamed’ –another collaboration with the Clarks.

Sure, this is a Gospel album but most of the songs can be interpreted in a secular way and anyway if you crave proper soul, that shouldn’t be an obstacle. One listen to ‘Just Between Me and You’ will convince you anyway!

THE 3 WINANS: ‘Foreign Land’ is out now on Absolute Recordings.