IN FEAR AND DREAD! 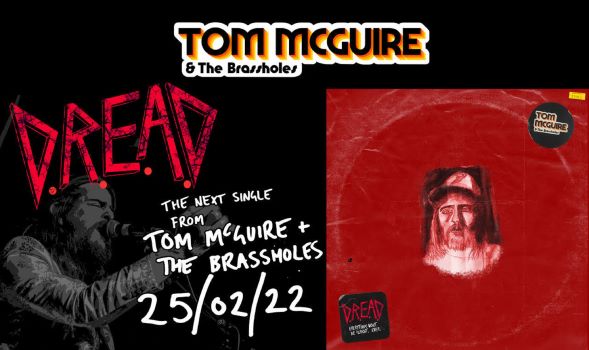 TOM MCGUIRE & THE BRASSHOLES are a soul and funk band from Glasgow. We’re told that they first met up as buskers playing the mean streets of Scotland’s second city. That background explains why they’re such a big live draw. Record wise, their first single, ‘Ric Flair’  was a  streaming success, and the follow up, the equally enigmatically titled ‘Oh Savanna’ featured the same big funky sounds that show how influenced the band are by people like a certain James Brown, the  Meters and Dr John.

Tom and the team are just setting up the launch of anther hunk of funk… the sombrely titled ‘D.R.E.A.D.’ The message in the music is as sombre as that title. Tom explains: “D.R.E.A.D is a piece born of the confusing and fractured era of lockdown. It is a song about the feeling of being entirely overwhelmed with not only the day-to-day stresses of life, but self-doubt, self-loathing, hopelessness and questions about the meaning and worth of anything at all. All of this descending the very moment your eyes open, first thing in the morning. This is an experience that I found myself confronted by often during lockdown. I have tried to encapsulate that quite brutal yet very human experience in this song.” Tom, however, is quick to add that yes, life is confusing and hard, but music is fun and great, so let’s talk about it whilst at one and the same time, getting down!

So,  ‘D.R.E.A.D.’ is hugely funky in the manner of James Brown and Tower of Power and yes, maybe, given the title and the art  work (above, heavy metal flavours?), that might sound odd but believe us,  this, ‘D.R.E.A.D.’ is heavy, heavy funk and it’s good to go from 25th February.