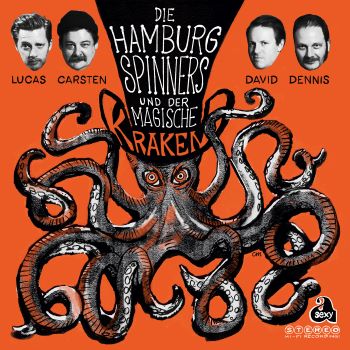 We’ve had the Detroit Spinners and now we have a new(ish) band from Germany – THE HAMBURG SPINNERS – the clue to exactly where they’re from is in the name! And a clue to their sound is in their alternative name – the name by which the locals (Hamburgers? – don’t think so!!!) know ‘em by – Carsten M. & The HGs. Yep, like a certain Memphis combo the Hamburg crew are a Hammond-led outfit.

Their line up is Carsten ‘Erobique’ Meyer (Hammond B3), Dennis Rux (guitar), David Nesselhauf (bass) and Lucas Kochbeck (drums) and they’ve just launched their second album, ‘Der Magische Kraken’ (sorry, no idea about the meaning) but the 11 tracker is an intriguing blend of mod-jazz, floating Hammond lines, funky beats, quirkiness (I mean, look at the cover!), humour, Southern soul, edgy, cinematic flourishes and what they call “economic improvisation”.

Most obvious track to start with is ‘Grottenrallye’ (again, sorry no idea) which is an amalgam of ‘Green Onions’ and the blues ‘Help Me’ which, of course, was the inspiration  for Booker T’s ‘Onions’. Then there’s ‘Jeanskutter’ which seems to track ‘Time Is Tight’. Throughout the album you’ll hear echoes of other classics and influences which you won’t quite  be able  to fathom out (Timmy Thomas springs to mind) but that only adds to the intrigue.

With the exception of ‘Captain Flamingo’ all the track titles are in German – but it’s what’s in the grooves (analogue with a “live” feel) that counts and right across the album there’s plenty to enjoy – soul-jazz with a sense of humour is alive and well and thriving in Hamburg!

THE HAMBURG SPINNERS; ‘Der Magische Kraken’ is out now via Legere Recordings